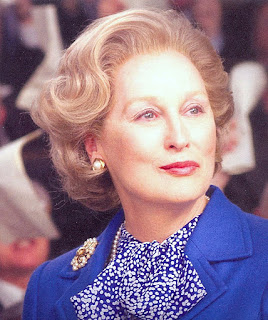 It’s been thirty years, but Meryl Streep may have to make room for that elusive third Oscar. With Tuesday’s announcement of the Academy Award nominations, the heralded actress’ brilliant portrayal of former British Prime Minister Margaret Thatcher in “The Iron Lady” (already a Golden Globe and Critics’ Choice winner) is the front runner for the coveted statuette. But with the most impressive roster of Best Actress nominees in recent years, her win is not a slam dunk. Streep’s stiffest rival will likely be her “Doubt” co-star Viola Davis who delivered a heartachingly beautiful performance in the far more popular film “The Help.” And Davis–who was nominated as Supporting Actress for her role in “Doubt” ( and received a Golden Globe shout-out from Streep) has yet to score Oscar gold, something the Academy likes to spread around. An unlikely groundswell of support could also garner Glenn Close her first Oscar for the poignant, but little seen “Albert Nobbs,” a film the actress has been trying to get made for over fifteen years.

Check out the Oscar site for a complete list of nominations. I’ll have more on surprises and snubs in all the categories, as well as predictions, later.

But for now, let’s delve into “The Iron Lady,” and the case for Streep. Phyllida Lloyd’s film is more a character study ( and a complex and compassionate one) than a history lesson. Lloyd aims for the personal over the political. And she’s received some flack for that, mostly from British critics and historians.

Some are perturbed by the release itself. Unlike many biopics, the subject is still alive. At 86, Baroness Thatcher, the woman once simultaneously reviled and revered, for her decades’ long steely leadership, has become a recluse, isolated by growing dementia. The current British Prime Minister David Cameron recently denounced the timing of the film, saying it was “insensitive” and could have waited “for another day.”

But for those of us interested in a powerful and elegant character portrait, there is little to disappoint. And the British film community is certainly forgiving; she just won the British Academy Award. And for good reason. Streep conquers the role of Thatcher, capturing her nuances with the actress’s uncanny, signature perfection. She doesn’t engage in a mere impersonation, but embodies Thatcher’s very essence. It’s not just the coiffed hair, the carriage and the characteristic tone of voice. It’s the the agility Streep demonstrates as she seamlessly dips in and out Thatcher’s razor-sharp persona to an ailing, aged woman recounting her hey day that is so astounding and mesmerizing.

The film opens with Thatcher as an octogenarian, her once “blotting paper memory,” evaporating in the wake of of a series of strokes. She’s seen cracking an egg for her husband, Denis who has died, but still appears, engaging in very lively discussions.

Streep’s Thatcher slips in and out of consequential scenes, hinting at her remarkable rise to glory, but not dwelling on it.Still, there is enough politics to put Thatcher’s life in context and give viewers unfamiliar with her impressive tenure ( 1979-1990; the longest in modern history) more than enough political substance to hold onto. The war over the Falkland Islands forms the crux of her rise to success, as Thatcher fiercely stands up to Parliament’s “Old Boy’s Club.” We also see her political kinship with President Reagan and witness her downfall as the bitter battle with the unions propels her anguished exit from No. 10 Downing Street.

At heart, though, Lloyd’s “The Iron Lady” strives to unveil the woman behind the steely iron facade.

As dementia begins to set in, we are given glimpses into Thatcher’s relationship with her husband, played by the wonderful Jim Broadbent ( who handled similar duty opposite Judi Dench in the lovely Iris Murdoch bio-pic “Iris“)and her children, Carol (Olivia Colman), who helps care for her, and Mark, who lives in South Africa and whom the audience never sees.

As she goes about packing up Denis’ belongings for charity, the elderly former Tory leader is swept back to the time when she was a young woman – the daughter of a grocer, and an ambitious Oxford grad with evolving political aspirations. We also get charming peaks at her courtship with young Denis Thatcher and their marriage during tumultuous times.

I know purists have quibbles with the timing, accuracy, even the style. But, Lloyd has turned out an artful and entertaining movie, one that offers great personal insight into a fascinating woman. And while I can’t guarantee Streep will take home her first Oscar since the “Sophie’s Choice” win in 1982, her fierce and nuanced performance is bound to get your vote.

The 84 annual Academy Awards will air live on ABC on Sunday, February 26.

Silence is Golden... May be Named Oscar, too! 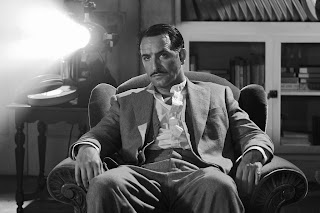 Sunday’s Golden Globe hat trick should send more folks to see “The Artist.” It’s not just the accolades–for Best Picture, Actor and score– but the exuberance the winners exuded. That very quality is at the heart of this unlikely commercial success.

Okay, it is mostly silent, in black and white and foreign, But Michel Hazanavicius “The Artist” is an elegant fanciful valentine to the movies. And while I can’t guarantee anything, I’m guessing, like mine, your heart will dance.

Set in Hollywood’s tender age,between 1927-1933, “The Artist” is about Hollywood’s transition from silent movies to talkies. It focuses on the relationship between the handsome, narcissistic George Valentin (the charming and oh, so expressive Jean Dujardin), a beloved movie star, and Peppy Miller (the lovely Bérénice Bejo),a young actress on a quest for stardom. The opening sequence takes place at the premiere of George’s latest adventure film, in which he appears with his scene stealing Jack Russell terrier and outrages his co-star as he takes a self-centered bow before greeting a gaggle of adoring fans on the sidewalk outside the theatre.

George and Peppy have a fleeting meet cute scene that will become significant later. She lands a small role in one of his films. They dance, fall in love and part before uttering their love. Just like in an old romantic movie.

Then sound crashes Hollywood’s party and the movie business is transformed. George confronts the crisis in a surrealistic comic sequence that follows him as he hears objects around him making noises. Passing girls chatter, a feather falls with a mighty explosion, but George remains silent, and, as he perceives himself, unspeakable. Like Chaplin he decides to buck the trend and continue making silent films, writing, directing and even financing his own work.

Hazanavicius borrows unapologetically from “A Star is Born,” showing George’s career in free fall and Peppy’s glamorous ascent. Vintage movie buffs will recognize glimpses of the ill-fated romance between silent film god John Gilbert and Greta Garbo, as well as homages to Douglas Fairbanks, Gene Kelly, and scenes from “Citizen Kane, ” “Singin’ in the Rain,” “ and "Vertigo”

Dujardin and Bejo deliver witty and wonderful performances, evocative of classic Hollywood romances. And James Cromwell, as George’s devoted chauffeur, and John Goodman as a gruff studio boss, add delightful support. Uggy, who plays George’s Jack Russell, and almost walked off with a Golden Globe himself, joins the ranks of Rin Tin Tin and Asta as classic canine companions.

An instant classic, “The Artist” will certainly make noise at the Oscars, too. But by then, you’ll know what the commotion is all about. Really, go see it. It’s apt to delight you more than any other movie in recent memory.

A NYC high school teacher just got an F for forgery — and spelling.

Mona Lisa Tello was busted after she allegedly submitted a fake jury duty letter rife with a slew of misspellings to get out of class for two weeks.

Guess she's still got a lot to learn. And she'll have plenty of time to learn it. Tello agreed to retire on January 15. But she may get to do some spelling exercises behind bars. She's facing prosecution on fraud charges.

Go to the back of the class!

aba
Posted by Amy Beth Arkawy at 3:32 PM No comments: