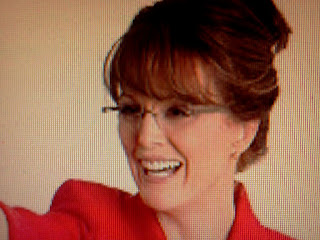 Maybe there was too much hype over “Game Change.” The film, based on the McCain-Palin portion of the political-gossip bestseller by John Heilemann,and Mark Halperin, is unlikely to change your mind about Sarah Palin. If you’re a Palinite you’ll probably follow your leader the former VP candidate herself and eschew the movie altogether. If you’re a critic, your disdain will only be reinforced. Because as good as the acting is–and it will most certainly garner star Julianne Moore a slew of awards– very few new insights emerge.

We already knew Palin was the McCain campaign’s Hail Mary pass. Down in the polls and with seemingly nothing to lose they plucked the new Alaska governor out of obscurity, thrusting her onto the national stage with limited vetting. What comes next plays out in predictable fashion. We already know the story and the outcome.

So why bother watching “Game Change?” The acting. Yeah, it’s that good. As is the make-up artistry. Moore is the main attraction, of course, nailing everything from Palin’s voice, mannerisms and mood and shading her performance with a depth and empathy that transcends Tina Fey’s brilliant satire. She does, in fact, generate sympathy and ire as we watch Palin swat away interview and debate prep advice and nearly spiral out of control as the rigors of the relentless campaign and media spotlight take their toll.

Woody Harrelson, as Steve Schmidt, the senior advisor most responsible for the Palin pick, is also formidable. And the oft under-rated Ed Harris offers another magnificent turn a John McCain.

Beyond that, you may discover a better understanding of the high-stakes, often cynical machinations of presidential campaigns. But I’d suggest the purely fictional “The Ides of March” is a far more compelling film, with unexpected twists and turns, and lessons that may have greater resonance.

While it’s a good film, I wonder how much more powerful “Game Change” might have been if it were made five or ten years down the road. With time’s fermentation and the lens of perspective, this episode in American political history will surely provide a far more intriguing and potent lesson. Something future filmmakers are apt to explore.

Right on, AB! You nailed it as usual. Really tired of Palin, but watched it anyway. And Julianne Moore was spectacular. All around good acting, but sort of ho-hum in the end. Nothing shocking.