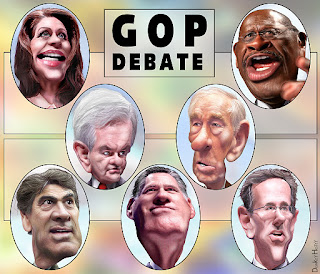 'Tis the season to revel and rejoice.
But if you're a red meat Republican you have little choice.
And you like it that way.
Ah, but for true blue Liberals, it's a new jingle every day.

Much can be said of Newt Gingrich.
His posture and pitch,
all ego and bombast.
We only hope his surging in the polls will last.

But should Romney rebound, have no no fear.
Mitt flips and flops like Grandma before she got run over by that infamous reindeer.

And Bachmann, too, continues to deliver.
Enough Malaprops and mistakes to make us quiver.
Her stand against gay marriage she makes such an ado
And always walks off with a face full of marshmallow goo.

'Live and let die!'
That's Ron Paul's cry.
He was Dickens model for Ebeneezer
Go ahead: take a close look: Neither man's eyebrows ever met a tweezer.

He can't name the Justices on the Supreme Court
And one or two he's willing to abort.
But filled with gay bashing and verbal blunders Rick Perry
remains oh, so misguided and merry.

Herman Cain's campaign may be on hold
But he's bound to hit the trail again once Gloria's scolds get old.

Hunstman may be smart,
but he'll never get the part.

Santorum's high school nickname was Rooster.
From Palin he hopes a campaign booster.
Still his numbers and attitude hover in a marginal fog.
He better spike that egg nog.

The Donald canceled his debate.
That's because everyone but Newt said the invitation came too late.
Both guys' heads are too big and their waistlines could be leaner.
Still, Hollywood's working on the movie: 'Mean & Meaner.'

With a lump of coal in every Republican's stocking,
it's almost no fun mocking.
Every day, every week, brings more zingers
for loyal fright wingers.

If that doesn't get on your Christmas cringe.
Then, my friend, you're not a real Republican, not even a twinge.

So there's hope for you yet.
And if I were as rich as a Romney I'd wager a bet.

Santa's a socialist and God's a Democrat,
Take a look at the GOP field and roll out Obama's second term Welcome mat.

Merry everything to all.
And to all a good fight.

Loved this one! It's so true of all those Republicans! If the "GRINCH" gets the nomination - Obama is a shoe-in........
Happy Holidays!

You're a riot, AB! Another good one. Now that creep Michal Savage is offering Newt 1 million to drop out. He won't do it. thank God for Newt's big, fat ego!

Funny girl! Doubt the GOP will be laughing in November.

Hilarious! You funny or something??

You're a poet.
And now everyone knows it.
Too bad we know it's true.
Now we'll expect more from you.

You are one clever nutty nut... that's what you are. Merry whatever the hell you celebrate. And Happy New Year!