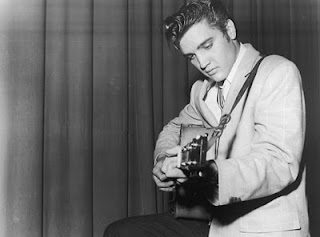 Some say Vegas killed him. Maybe it was genetics, short-circuited by an over-indulgence in fried peanut butter and banana sandwiches. Not to mention all those pills.

His end surely came far too soon-in 1977 at the age of 42-- but the King of Rock 'n' Roll continues to reign. On what would have been Elvis Presley's 75th birthday, we have to celebrate his indelible mark on music and pop culture. Check out this performance from his famed 1968 TV concert special. Here he's at the height of his powers--strong, handsome and fit with the voice and moves that made him famous twelve years earlier.

Elvis, his majestic voice and dangerous moves made him the first superstar in the startling youth culture that shook, rattled and rolled its way down Lonely Street, forever changing the American pop culture landscape. This young truck driver from the most modest of Tupelo, Mississippi homes, drove through every town, gathering teenage hearts and souls with enough raucous indignation to set a generation on fire.

While it seems so tame by today's standards, the sexual alchemy his hips and lips generated posed a threat to stunned parents and a TV execs, who after one pulsating appearance on the Ed Sullivan Show, censored the lower half of his body from future shows.

Never known to be overtly political, Elvis did have a fascination with joining the DEA as a special agent. Ironic, of course, considering his later abuse of prescribed medication and alcohol. He never got that appointment, but he did pose for a famous photo with President Nixon ion 1970. The photo is, in fact, the most requested image from the National archives, beating out the Constitution and Declaration of Independence.

He reportedly maintained a "phone" friendship with Nixon, calling the disgraced ex-president after Watergate and during a bout of phlebitis.

Another president, of course, would be oft-compared to the King. Bill Clinton--a proud Elvis fan--shares some of his idol's swagger and sway, an unmistakable charisma that has earned him both devotion and controversy.

As for Elvis, his music remains a cherished part of America's musical legacy, an influence and primer for all that has come along since. And just in time, a new boxed set of his songs has been released. Good Rockin' Tonight features the hits, B-sides and rarities.

Never mind the industry he has become in death, earning billions he never came close to seeing alive or the tacky official website that serves as the gateway to the spectacle that is Graceland. Forget the Vegas impersonators. And all those infamous sightings.

It doesn't matter what they tell you; Elvis never really left the building.