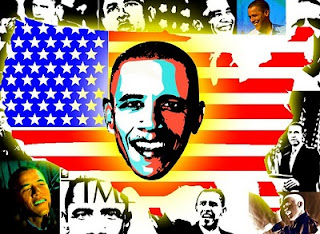 So we survived President Obama's first State of the Union speech. My take? The man can talk. And talk and talk. Honestly, I had to bail at 10 pm to catch the second half of the Spectacle finale with Elvis & Springsteen. And that was a rockin' show! Flashed back during commercials, and Obama was still going. The Energizer Bunny with a teleprompter. The President is as eloquent as he is loquacious, but I think he loses a lot of people. The speech--as most of his--would have been far more effective at half the length. Less is more. When it comes to deficits and speeches. He needs to appoint a White House Speech EDITOR.

Look, if you read RG regularly or follow me around cyberspace at News Junkie Post, who will win the 2012 election & other sites or have heard me on the radio, you know I'm a liberal, not a crazy shrill no compromise every Republican is a meanie liberal, but a liberal nonetheless. Still, I'm disappointed in Obama's first year performance. If I had to, I'd give him a far lower grade than the inflated gentleman's B plus he gave himself last December during that Oprah interview. But I went to Sarah Lawrence( Rahm Emanuel's alma mater) where they give you grades, but hide them with white-out and evaluations until it's time to apply to grad school. So I'll hide Obama's grade--hoping to see tremendous improvements-- for another two and a half years.

Let's hope he can deliver on all those jobs, jobs, jobs. And by deliver I mean get a real comprehensive plan through Congress that actually creates good, secure jobs. Not some watered down tree killer deal that does nothing but further line the fat cat bankers' pockets. You know, the reverse of the big go nowhere health care reform. To be fair, the Prez isn't giving up on that either. But so far, we've got nothing, And if they pass it tomorrow, it will just give the insurance companies a reason to dance like nobody's watching.

He also served up some pretty lofty talk about finally repealing that dopey "Don't Ask,Don't Tell." If Gay Americans are willing to serve and put their lives on the line they deserve the same rights as anyone brave enough to serve our country. With two wars going and an all-volunteer armed forces stressed to the max, we need all the help we can get. And we need to be grateful to all of them.

As an aside--and it's a big one-- I did notice Justice Alito shaking his head and mouthing "not true" when Obama criticized the Supremes for selling America to the corporations. A big no no, Justice Alito, bigger than Joe Wilson hurling " You Lie" during the health insurance speech.Whether Obama made the right legal citation is being debated in the blogosphere. But what can't be debated is this: the Supreme Court justices and the Joint Chiefs of Staff are always supposed to sit stoically through speeches. Showing emotion or signs of agreement or disagreement politicize the very members of the government who MUST display neutrality at all times. So Alito was not merely being impolite, he was in fact, violating his office. Was the infraction grave enough for Alito to forfeit his robe? Doubtful. But, I think a three month suspension is fair. And as a temp-to-perm replacement I nominate Judge Judy.

Still, I was buoyed by Springsteen's passionate performance of "The Rising." And if Obama and the Congress can harness some of that spirited American energy, real change could happen. If not, we'll have to do it ourselves. We're Americans. We'll find a way.

Labels: Obama, Sate of the Union

We all had high hopes for President Obama and so far he has not delivered. I for one hope that he can get his act together and start making some changes. Jobs are certainly a priority and it would behoove him to come up with a plan that works. I am willing to give him a chance since he did inherit a MESS!! Let's forget all the pettiness nonsense between the two parties and set our minds to getting things done. I would like to see each Senator and Representative take an oath that they have read the health plan in its entirety before voting on it. I think that most have not and I don't know how they can vote for something that they haven't read. Wouldn't it be wonderful if it was deemed a "Do-Over?"
Thanks for your review of the President's speech last night. Marilyn