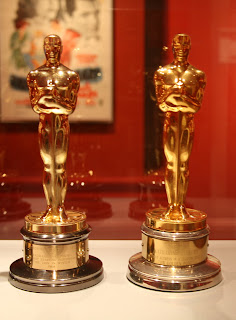 All the acting categories have clear favorites: the oft-neglected, now five time nominee Jeff Bridges who scored the top prize at both the Golden Globes and SAG Awards--considered predictors for the Big trophy--looks poised for a long over-do win for his acclaimed role in Crazy Heart . Same can be said for first time nominee Sandra Bullock, whose role in the Best Picture nominated The Blindside ,also scored top prize at the Golden Globes and SAGs. Ditto for Best Supporting nominees Mo'Nique and Christoph Waltz, winners for Precious and Inglorious Bastards, respectively.

Of course, the Academy has been known to throw a curve or two. Remember when William Hurt won all those years ago for Kiss of the Spider Woman? Or Gwyneth Paltrow's inexplicable victory for her lightweight turn in Shakespeare in Love? If there's a curve this year, look for a tie bewteen Bullock and Meryl Streep for her amazing performance as Julia Child in Nora Ephron's uneven Julie & Julia.

The real drama could be a battle of the exes as James Cameron's Avatar faces off against ex-wife Kathryn Bigelow's The Hurt Locker in a few categories most notably Best Director and Best Picture. Bigelow has already nabbed the coveted Director's Guild Award, usually a solid Oscar predictor. But Cameron won the Golden Globe.

The Best Picture nominees are:

Avatar, The Hurt Locker, Precious, An Education, A Serious Man, Inglorious Bastards, The Blind Side, District 9, Up and Up in the Air.

The big question: now that there are 10 Best Picture nominees, how long will the show be? Place your bets. I've got dibs on April 15. I figure they've got to get home in time to hit the local H&R Block and pay homage to the tax man. And with Alec Baldwin and Steve Martin handling the festivities, the evening could be a delight or a disaster. Let's just hope they fare better than Gervas at the Globes and Colbert at the Grammys. They really should have an eject button installed and Billy Crystal warming up in the bull pen.

I can't comment on all the films, but Up in the Air -- which captured the cultural zeitgeist--might pull out a wild card win. Read more in my News Junkie Post review.

Another good article on the nominees and perspective hopefuls of the "Oscars." Let's hope that the Academy votes sincerely and not just on popularity. There certainly is a golden crop this year. My money is on Jeff Bridges for his role in "Crazy Heart" - Can't wait for the outcome. Lucinda