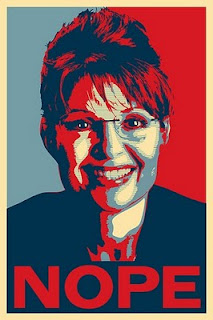 I swore I was going to ignore the crazy Tea Party Rally last weekend. Planned to steer clear of Sarahcuda's $115,000 keynote speech. But I can't resist a mini rant. Caribou Barbie just annoys me, I guess. While she was busy taunting Obama supporters asking, "how's that hopey changey stuff workin' for ya now?" and deriding the President for using a teleprompter, Palin was "palming" her talking points.

She scribbled "energy, " tax cuts, " and 'Lift America's Spirit" on her palm, and appeared to glance out it frequently during the Q & A following the big speech.Think she'd have those conservative 101 ideals ingrained on her brain. Still, gotta hand it to her, at least Palin's an old-fashioned fourth grade kind of cheater!

And a hypocrite, too. Last week Sarchuda went gunning for White House Chief-of-Staff Rahm Emanuel after a dopey and insensitive remark he made last August surfaced in an article. Okay, he shouldn't have used the 'R' word. But he shouldn't be fired over it either, as Palin has demanded. The fact that Emanuel called progressives boycotting Democratic congressmen who didn't support a public option f--- retarded back in August wasn't just insensitive to the mentally challenged it was a big political tell, too. It was a clear indication that the White House was never eager for or willing to fight hard for full-scale health care reform.

But I digress. Back to Palin. She wants Rahmbo tossed, but she defended Rush Limbaugh's big mouth. Rush added his two cents last week skewering political correctness saying, "people are so insulted because somebody called a bunch of retards, retards." Nice, Rush. So when pressed to comment, Palin first sent a lukewarm rebuke via a spokesperson that decried general "insensitivity" without mentioning Limbaugh by name. Then days later, after the Grand Pooh Bah's people must have called the Wasilla compound, Palin said there was a big difference between Rahm and Rush. Yeah,something like 400 lbs and 300 IQ points "What Rush said was satire," she said.

Yep, Rush is big on satire.You know the way Beck is big on comedy. It's all unintentional.

Think the quitter,half term governor of Alaska's got thing for double standards? You betcha!

You Betcha Amy Beth you have Saracuda down to a science. She is to be ignored altogether.
Let's hope to see and hear less about her.
Ramona