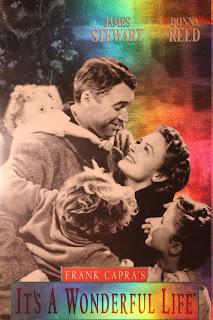 I know I risk having gingerbread, or worse, vats of eggnog, hurled at me. But I have a love-hate thing going with It's a Wonderful Life.After over-exposure to the Frank Capra Christmas movie classic as a child, I ditched it and all its warm and fuzzy sentimentality. I had fleece socks and an MFA fellowship, after all. So what did I need with all that simple love and kindness?

After watching George Bailey realize how important his life was, I don't know, something like fifty times before puberty even set in, a girl gets jaded. Remember, this was back in the days of before cable TV offered hundreds of stations with nothing on, and no one owned the film, so it was played on almost every channel umpteen times throughout the season.

For quite a few years I avoided the movie completely. But I recently saw it again. And it looks like love again. The sweet, heart-warming tale of a small town bank owner who takes on the greedy, heartless tycoon, Mr. Madoff... uh, Potter, and is loved by all he's ever met, feels oh, so comfy again. Just like getting together with a long-lost friend.

But you know what? It's still not my favorite seasonal offering.

That honor has always gone to Christmas in Connecticut, Peter Godfrey's 1945 holiday trifle. Barbara Stanwyck stars as an early faux Martha Stewart who finds her true love on her phony honeymoon with her fake hubby. She's a popular magazine columnist who's supposed to write about hearth and home... only thing is she doesn't have either. And when her publisher--the funny and formidable Sydney Greenstreet--demands she host a navy hero for Christmas, her scam risks reveal. Until her insufferable beau offers his convenient farm and a makeshift marriage. It's corny--even for that era--but a delightful, kitsch confection that is a perfect complement to a late night peppermint schnapps infused hot cocoa. Great co-stars include Reginald Gardner, Dennis Morgan and the ever adorable, S.Z. "Cuddles" Sakall.

Comfort and Joy: Bill Forsyth's rarely shown 1984 holiday treat starring Bill Patterson as a Scottish disc jockey who finds his world unravelling after his girlfriend leaves him and he unwittingly gets embroiled in a war in the ice cream truck underworld. This is a quirky confection from the director of Gregory's Girl. Dire Straits master Mark Knopfler provides the score.


Scrooge:I'm talking about the 1970 musical starring Albert Finney in a broad and beautiful--okay hammy--performance. In a crowded field of many fine Christmas Carols, this one stands out for me because I remember seeing it at Radio City with my grandfather when I was a little girl. And the whole day with Pop--from getting to circumvent the line because he knew the management--to watching a movie and a live show with the world-famous Rockettes ( yes, Trudi) in that majestic theatre, is indelibly etched in my memory as one of the sweetest days of my life. But even without that experience, the film, directed by Ronald Neame,boasts much. There are stellar performances by Alec Guinness as Marley's Ghost and Kenneth More as Ghost of Christmas Present. The sets courtesy of Terry Marsh are luscious. And Leslie Bricusse's score, though a tad uneven, offers bright spots including: "Father Christmas," "I Hate People" and the effervescent show-stopper, "Thank You, Very Much."

The Man who Came to Dinner: This 1941 comic classic stars Monty Wooley as an acerbic radio commentator who slips in front of an unsuspecting mid-western family's house, and stays for the holiday season, threatening litigation while he turns the household upside down. Bette Davis in a rare genial part, co-stars as the insufferable brute's love-struck assistant. She falls for the local newspaper editor; he plots to foil the affair. Other wacky characters parade through the busy house. Small star turns by Reginald Gardiner,Jimmy Durante, and the great Mary Wickes. Based on the Kauffman-Hart Broadway hit (which was based on their friend radio commentator/columnist Alexander Woollcott). Directed by William Keighley. An ironic footnote: many years later, during a NYC hotel strike, Bette Davis insinuated herself into a Connecticut family's home for months. That real-life episode is chronicled in Elizabeth Fuller's funny and charming memoir, Me and Jezebel.

Miracle on 34th Street: The Original! And only the 1947 original. It's been remade twice--in 1973 and 1994-- and neither holds a Christams candle to the classic which earned Edmond Gewnn an Oscar as Kris Kringle playing himself in Macy's and going on trial to prove his Santa suit is the real thing. This delightful holiday romp opens on the famed Macy's Thanksgiving Day parade ( and is usually shown on TV on Turkey Day, though it was missed this year) and captures the growing ( in the '40's) materialism of Christmas, faith, love, and child-like wonder. Maureen O'Hara, John Payne and a young Natalie Wood all offer terrific performances in George Seaton's movie the studio thought so little of, it released it during the summer! But, unlike It's A Wonderful Life,which was an initial box office flop--this one scored a miracle--and was re-released for the Holiday season.

There are others, to be sure, including: The Bells of St. Mary, Holiday Inn and recent hits Home Alone and Love Actually. But I'd rather start watching than rattle off more. Bet you didn't know: every time a bag of pop corn is popped, a movie critic earns her wings... or at least a box of Raisinets.

aba
Posted by Amy Beth Arkawy at 9:50 AM

Hi there - nice post. I've been watching It's A Wonderful Life since I was little, and although I always loved the movie, it took on a whole new meaning for me once I was old enough to understand the bigger themes, like sacrifice, responsibility and love. I'm glad you gave it another chance. I wrote a holiday song called George Bailey, thought you might appreciate it. You can listen on my website or watch the youtube video below. Thanks and happy holidays!