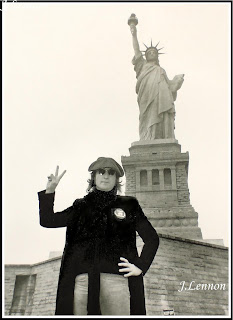 We heard the news twenty nine years ago today. And for those of us too young to remember the assassination of JFK, 12/8/80,the night John Lennon was gunned down and murdered in front of his home at the Dakota in New York City was our collective loss of innocence. For kids born in the '60's and '70's the brutal death of a cultural icon was our jolt into an unforgiving decade. A friend broke the news and we spent the night riveted to both TV and, mostly, the radio. This was in the days before before 24/7 cable TV, so we turned to the DJs to offer comfort and context. Already intrigued by Marconi's Box, this episode lured me closer to what would be a rewarding if somewhat tumultuous career in radio.

Coming of age in the era of Ronald Reagan, AIDS and Gordon Gekko's "Greed is good" rally cry, our generation may have been more cynical than the Boomers before us, but we still had the music to sew generation to generation. And for nearly fifty years the Beatles have been a vibrant common thread in that cultural mosaic. The recent success of both their digitally remastered collections and the Beatles: the Band video game is evidence of the band's remarkable influence and staying power.

Dubbed the "smart Beatle," John Lennon's musical and literary sophistication is apparent in a wide spectrum of the group's tunes including "Norwegian Wood," "Strawberry Fields" and "The Ballad of John & Yoko." His solo career--surprisingly substantial considering his self described "house husband" hiatus in the mid-seventies and his tragic death at forty--shows both poetic flourish(the iconic "Imagine") and homage to his early rock roots ("Whatever Gets you Through the Night").

Lennon's bold public persona and wry humor made him something of an acquired taste at first. His infamous 1965 comment about the Beatles being "bigger than Jesus" was misconstrued and led to a brief U.S. radio ban. Lennon never said the Beatles were greater than Jesus; he was making a sarcastic observation about the outrageous hoopla that fueled Beatlemania.But soundbites aren't kind to wit or nuance. Other artists like Sinead O'Connor, Cat Stevens (Yusef Islam) and the Dixie Chicks would share similar backlashes, each with varying rebounds.

The Beatles' popularity, of course, persisted, despite Lennon's growing outspoken political proclivities. Some were offended, others amused and enlightened by John and Yoko's famous Bed-in for Peace. Part early '70's publicity stunt, part traveling demonstration, the events--staged to end the War in Vietnam-- irritated the so-called establishment and earned Lennon a spot on Richard Nixon's enemies list. Nixon and his FBI henchman J. Edgar Hoover were so threatened by John's charisma and sway with the already divisive youth culture, they actively waged a campaign to oust him from the country, using a minor pot bust years earlier in the U.K. as their ammo. You'll find a compelling account of the case and the era in the documentary The U.S. vs John Lennon ,available now on DVD.

The plot for Lennon's deportation was squashed by public outrage with a little help from John's friends in the arts and politics. And he was allowed to remain in the adopted city with which he shared such mutual love. Given his sense of irony, John would probably shrug and sing a few lines of "Instant Karma" had he been privy to his tragic fate on that peaceful New York City street he called home.

John Lennon was a complicated man: a poet with a showman's touch; an idealist with a pragmatic knack. ( pairing the Lennon/Ono classic " War is over with "Happy Christmas" was a brilliant move. The medley became a multi-generational anthem that is played annually on thousands of radio stations worldwide.) He had suffered early tragedy, losing his mother to a car accident when he was seventeen; and as a father he had a tricky relationship with his oldest son Julian( who has said recently the two were repairing their strains at the time of John's death). He was famous for his devotion to Yoko, but he left her briefly for another woman. He had returned in time to rekindle both their passionate romance and his career. The comeback album, Double Fantasy was released just before his death.

Every year around John's birthday in October and now on the anniversary of his death, people speculate about all the work he could have, would have amassed in the all those stolen years. Yoko has said John would have loved the Internet, and would have certainly found interesting uses of the new medium. Julian--who has just emerged from his own nearly two decade self-exile from music --said his father would most certainly have continued to make music. And Lennon may have also continued his passions for painting and writing. His sketches and paintings have fetched high price tags at auctions. And he displays a raw, literary flare in his book, Skywriting by Word of Mouth.

Lennon's legacy for peace, captured in beautiful and profound simplicity: "War is over. If we want it," is as relevant today as it was all those years ago. It's still hard to believe anyone was ever threatened by such a loving and powerful message. Events from Band Aid to Farm Aid and artists from Bono to Springsteen, R.E.M. to the Indigo Girls, Mellencamp to the Dixie Chicks all owe a debt to Lennon's audacity, conscience and spirit.

From his exquisite discography to his indelible influences in music and society, John Lennon will forever shine on. Like the moon and the stars and the sun.