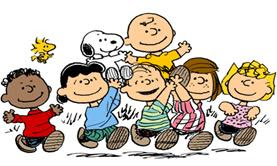 Call this character Ebeneezer STOOGE. Greg Wiseman, the mayor of Arlington, TN, outside of Memphis, must have hit the party egg nog a little early this year. Last week the small town pol found himself in the national spotlight for some nonsense he printed on his Facebook page. Apparently miffed that ABC preempted the "Charlie Brown Christmas" special two weeks ago so it could air Pres. Obama's Afghanistan speech, Mr. Mayor claimed Obama timed the speech with the intent to bump the beloved classic. And, oh, yeah, Wiseman also called Obama a Muslim ( which would be fine if he were, but he's not, so get over it already). At least he didn't bring up that silly birth certificate biz again.

And, for the record, ABC aired the Charlie Brown special last week and another showing airs tonight at 8 PM. Set those DVRS.

For its part, the town of Arlington threw its mayor under the bus and proclaimed on the town's official website that it doesn't agree with his views and ya all come down because Arlington is the friendliest place on earth.

Wiseman offered a lukewarm apology, called it "tongue-and-cheek humor between friends" that went too far. He's sorry, of course, if anyone was offended. But it was just a joke. Not a funny one, but can't hit 'em out of the park every time, I guess, right Mr. Mayor? The comments and the apology earned him two crownings on Keith Olbermann's "Worst Person in the World" list. Must have been a quiet week for Bill O & Beck. Don't bother trolling Facebook, Wiseman quickly deleted his account.

Oh, in case you're wondering, it's pretty clear Mayor Wiseman isn't even remotely related to those famous three Wise Men who factor into the seasonal festivities. Let's face it, this guy's not even smart enough to hang out with Tony Soprano.

Some people will try anything to get at our President. This Mayor didn't have to make such an idiotic comment, but we can't muzzle people, we can only ignore them. Thanks for telling it as it is.